No surprises here: we adore contemporary craft, want to see more of it out there, want to see it evolve, and yes, want the people who are involved to make a living (a good one, even) from doing what they love.

But it ain’t easy.

“Craft”–the Rodney Dangerfield of the arts world–suffers from a bit of an image problem. Many understand (well, kind of) the “value” of art, and “get” lowest common denominator mass goods, but have no clue what value to ascribe to craft. Plus, the economy hasn’t exactly done us any favors. And then, there’s the strong independent tradition among makers that makes collective action–like the promotion of craft–just a little difficult. “Like cat herding,” said a person who’d know.

So it got us thinking: how do you move the needle on a whole category of art or culture, such as craft? Can you? In the US there’s the American Craft Council and magazines and conferences, galleries and museums, and shows and fairs and Etsy. OK, but we all know it’s not quite cutting it, not really. So what else is there?

I got a hint that there might just be another way when I was looking at the site of the Crafts Council (UK) to find UK makers for our profiles. Immediately, I was impressed (OK, blown away) with an enormous, searchable database of makers, arts organizations and agencies, and employment/award opportunities. (This was the hub that I’d been looking for the in US but hadn’t–still haven’t–found. Or am I missing something?)

But I didn’t really have a handle on what they were up to until I got to have a long chat with Jill Read of the Crafts Council in London.

Yes, there too, crafts have traditionally suffered from an image problem. The conversations about “is craft really art” have been going on for decades, though craft is also a more integral part of the culture of the UK. (In fact, there are at least three major craft organizations in the greater UK: the Crafts Council, which promotes contemporary craft, and the Heritage Crafts Association, which promotes more traditional craft forms. AND there’s also the vibrant CraftScotland, showcasing contemporary craft beyond whiskey and woolens.)

And despite a more traditionally activist role in the arts, UK government funding of the arts is facing unprecedented reductions as part of the fiscal emergency surgery underway. In the US, some of the arts funding slack is taken up by the philanthropic sector, which isn’t quite as developed in the UK (because it didn’t have to be): according to Jeremy Hunt, the UK Culture Secretary, those in the US who earn more than £150,000 [approximately $250,000] give eight times more than those in the UK.

Despite all this, the Crafts Council is finding a way to get people talking about, caring about, making and buying high quality contemporary craft in the UK. It is about money, but it’s also about smarts, about having the right building blocks in place:

The overall approach seems to be making things happen, even in times of austerity and constraint. It’s incredibly inspiring. And very thought-provoking.

Jill and I sat down to unravel how the Crafts Council does this and some of the tough realities the world of craft faces.

Your mandate is clear: “To make the UK the best place to make, see, collect and learn about contemporary craft”. Talk about each of those components. Let’s start with MAKE. We have a programme of maker development called Collective that works to ensure that we support makers at every stage of their career from makers straight out of college through Hothouse to those who are mid-career through Artistic License.

(These programs are a combination of grants, mentoring, and coaching in business and similar skills. Throughout the Crafts Council programs, there’s a strong pragmatic streak based on the understanding that without strong business and management skills, craft won’t survive. We also like their Portfolio program that recognizes that makers often have to support themselves by having a portfolio of jobs…like teaching: one program helps makers learn how to become better teachers. Smart, that: it’s about the whole crafts person/maker and not just about what goes on in the studio.

We also appreciate that they do market development and trade promotion in the UK, US and throughout Europe.

Under the SEE theme, we work with partner venues to develop exciting touring exhibitions of contemporary craft (in order to help change peoples’ perceptions of craft and expand interest in it–from makers to collectors–especially outside of London). Some of these include Lab Craft (digital meets craft), Breath Taking (pushing the boundaries of glass) and Craft Cubes (rentable, traveling trade show-like booths that feature edgy contemporary craft exhibits).

We also have one of the largest collections of contemporary craft in the UK. We’ve acquired over 1,300 objects since the early 70s, and maintain many schemes to encourage museums to loan these objects – long term or short term.

Through our COLLECT program, we’re helping build the market for contemporary craft and find the collectors of the future through our two flagship selling events COLLECT: the international art fair for contemporary objects and Origin: the London Craft Fair.

We believe that the future of craft lies in nurturing talent and we put this to work in our LEARN programs. One of our key tasks is to help children and young adults learn about craft at school. It’s been taken off many curriculums and we need to get craft back onto them. Our current Participation and Learning initiatives include Firing Up! and Craft Club to help community members teach craft skills to kids.

Craft Council is also an advocacy organization, isn’t it? Yes. We’re effectively the voice of craft whether it’s in media or government. We want to make sure that people are thinking about us, and are continuing to value what we do. (To help spread the word, they also have a beautifully produced magazine called Crafts.)

Craft in the UK (and Europe in general) seems fresher and more conscious of design (and therefore more likely to fit into people’s lives) than it is in the US…to what would you attribute that? I think that there is cross-over between craft and design and many craft makers work with industry in a way that benefits both.

So how does the Craft Council relate to the DIY craft movement? In the UK here, we call them crafting, and it’s all still evolving. At this point, our organization is focused on supporting people who are professional makers, people making a living off of craft. We love the energy of crafters, though, and hope that our programs inspire and help them as well.

You put a lot of emphasis on working with other arts organizations and universities to deliver programs. I like that it’s not just about you, but about craft in general. Thanks. We do think we play the role of facilitators and finding the best resources to help with whatever the need is. There are many great organizations out there, and we both work with them and help them as we can.

Talking to Jill you get the sense that while not all is perfect in the world of contemporary craft in the UK, there’s a ton of energy and good will that’s been established.  And the thoughtfulness, breadth and organization of the ideas was impressive. Most important, though, was their humility and willingness to admit that what they do evolves and will continue to evolve–in response to what works for both collectors and makers, new directions in contemporary craft, and the broader culture of culture. Well done.

So, maybe there is another way for craft to get its day in the sun. Granted, government support works differently in the US, but I’d say that Crafts Council’s success is only partially about money. It’s just as much about good ideas, focus, and smart execution. 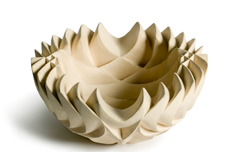 All images courtesy of the Crafts Council.

Filed under Global, The Big Picture